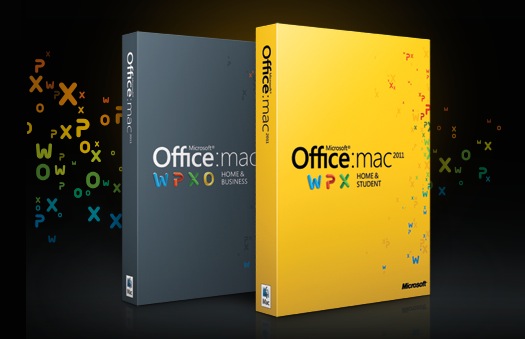 Microsoft Office 2011 for Mac will officially be released today and if you’re in New York, you can attend a special launch party according to the Microsoft Office 2011 for Mac Facebook page. We gave you a sneak preview of what to expect after testing the Beta version in April and the final release won’t disappoint Mac users who’ve finally got the OS X tailored Office suite they deserve.

There are several things to be excited about (although perhaps not quite as excited as some of the people of the Office 2011 Facebook page who are reacting like Microsoft have landed on Mars). These include the long overdue introduction of Outlook: 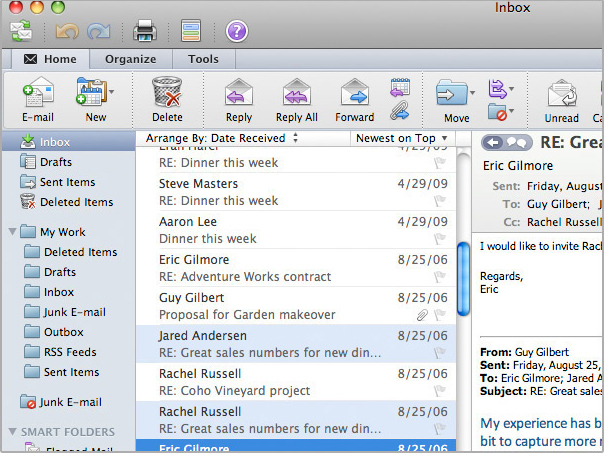 The implementation of the “ribbon”: 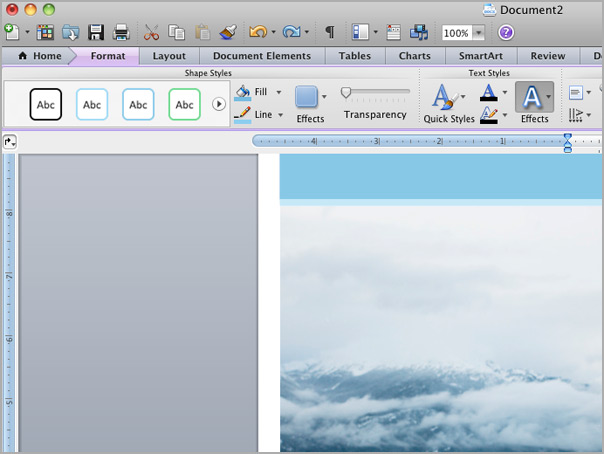 And the re-introduction of macros into Word and Excel thanks to the return of Visual Basic for Applications (VBA): 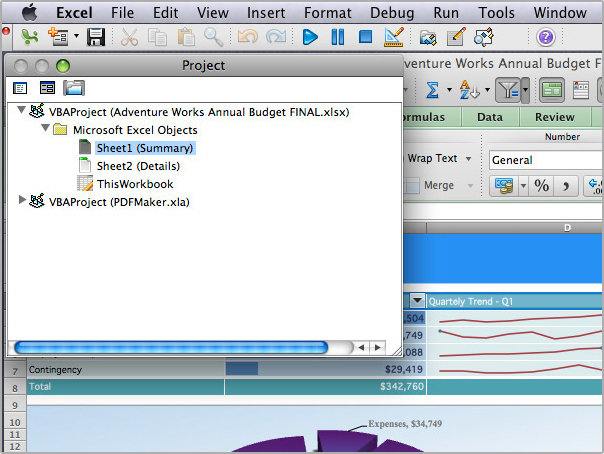 That’s not to mention the entire suite has a much slicker overall OS X interface which makes Microsoft Office finally look at home on the Mac.

There are many other improvements too. Sharing has been made much easier thanks to the integration of SkyDrive and SharePoint and Office Web applications are now open to Mac users. This includes the Web version of OneNote which makes it hard to understand why there is no version of OneNote in Microsoft Office 2011 for Mac.

Cross document collaboration is also much easier now so you can see exactly who’s working on a document at any one time: 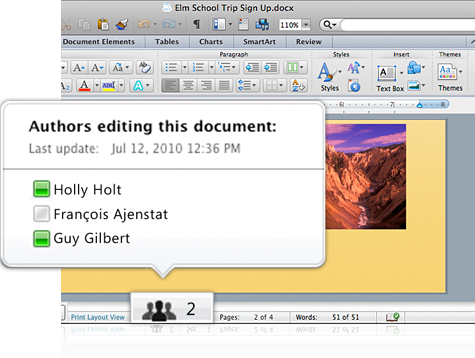 You can now view documents in full screen mode which not only looks great, but helps you focus on what’s important: 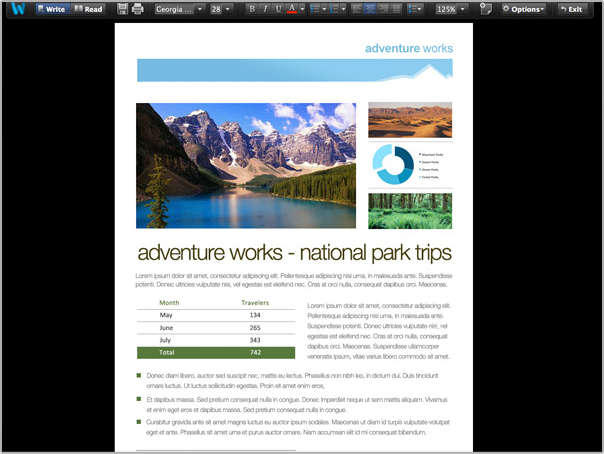 There are also lots of new and jazzy templates across the whole of the Office suite to make your documents dazzle and impress with minimal effort: 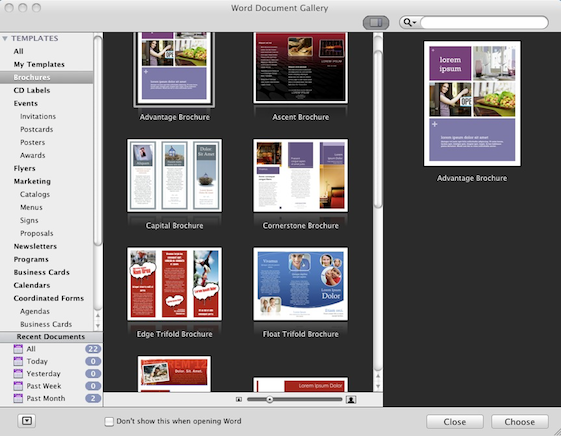 You can now broadcast PowerPoint presentations instantly to others thanks to a broadcasting tool: 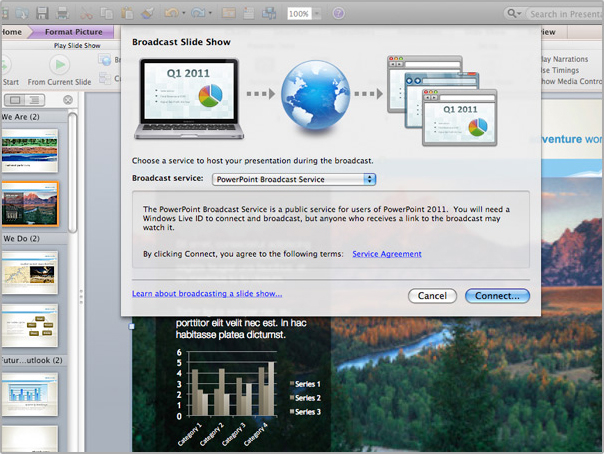 Image management, selection and compression have also been tweaked to make it easier and faster to work with images in Office: 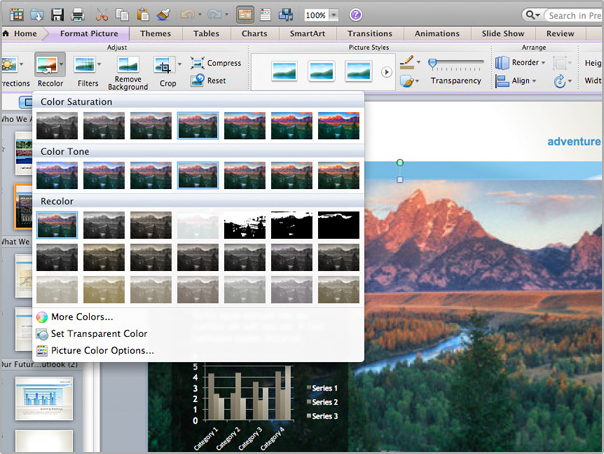 Finally, communication has been improved with the introduction of Microsoft Messenger 8 for Mac and Communicator for Mac 2011 which supports multiple protocols meaning you can connect to non-Microsoft IM protocols such as Jabber.

There are some downsides though. Power PC Macs are no longer supported and you’ll need OS X 10.5.8 or higher to use it. Most annoyingly though, 64-bit machines are not supported by Microsoft Office 2011 for Mac. This will surely have to be rectified by Microsoft within the next few years and may make some pause before upgrading immediately.

There are three Office 2011 suites available: Home & Student ($119), Home & Business ($199), and Academic ($99). However, the Home & Student version does not include Outlook which seems a bit unfair and effectively forces users to buy the most expensive Home & Business version if they are to enjoy one of the major advantages of Office 2011. There are also slightly more expensive versions if you need to install Office on more than one machine.

Overall though, Microsoft Office 2011 is a vast improvement on Office 2008. It looks better, integrates better across the suite and online but most importantly, brings it closer to offering everything that the Windows version does.

To find out more about the individual components in Office and for a full review, check out our reviews for Word, Excel, PowerPoint, Communicator and Office.